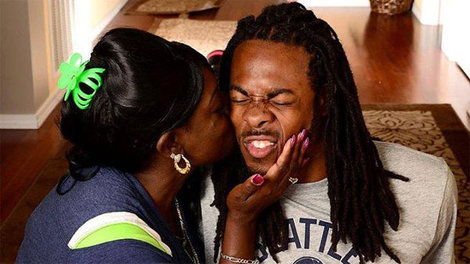 Do you know how hard it is being a sensitive guy these days? Girls can be so demanding. You finally meet a man who buys you flowers, open doors, calls his mother often and his female partner retorts, “Spineless wimp. Grow a pair. What kind of a man are you? Mama’s boy. Go back to your mother and come back when you have learned how to treat me like sh*t”.

The signs of an unhealthy attachment are usually self-evident. We are talking about a man who fulfils his mother’s every wish including the unreasonable ones, like an interrupted dinner date in the middle of a night out, to rush to the chemist to buy his mama’s pills and deliver them personally to her residence in Rongai.

The 30 year old man who has to ran every decision through his mother before he can make up his mind. “Eeh about that Zanzibar trip…Let me speak to mum first. She gets very worried when I am around the ocean. You know her favourite uncle who I am named after, died in an ocean accident in 1978”.

The man who compares any dish he eats to his mothers’. “Babes, your curry is yummy,all that is just missing is my mother’s chapos to make culinary heaven.”

No woman enjoys playing second fiddle to her mother-in-law. Every woman wants the main woman in your life. Men who keep comparing their wives to their mothers have issues but there is a reason for this.

It is called socialization. We are a society of men that have been largely brought up by our mothers. Our fathers are absent from our lives for various socio-historical reasons. Most are trapped in the vicious economic and social cycle of provision of prescribed masculinity roles. Which means they spend exceedingly long hours away from the home trying to provide for their families. Many succumb to the performance pressure and are undermined by unemployment, addictions, failing to fulfill their obligations as men and abandoning their homes all together plagued by feelings of inadequacy. A large number also die before their time. The death rate among men is high and Kenya has more than its fair share of widows.

Where a father figure is absent, young men, desperately attempt to fill the large shoes as the man in the home. They are exposed to the harsh and bitter reality of patriarchy in Kenya and are naturally predisposed to protect their mothers from other men who may disrespect her. While at the physical and financial level, most boys grow up to earn the capability of becoming providers and protectors after schooling, it is the emotional duress carried by their mothers that leaves young fatherless men confused. They take on the collective male guilt burden, shouldering the hurt and frustration of a failed marriage. In trying to rid mother of her unfulfilled marital expectations, boys take on the impossible responsibility of guaranteeing their mother’s happiness at the cost of their own personal development.

It happens to many boys with absentee fathers, where young men are molded in their mother’s ideal image. It is said the child is inclined to try to satisfy the emotional needs of his mother. Boys fear the rejection if they go off on a limb and assert their own independence. Mothers will naturally hang on to their boys with motherly concern, never quite letting them grow up. There are consequences to this attachment.

How a mother relates to her son determines to a great degree how he will relate to women in his adult life. Because mothers are the first impression that a boy develops about women. Mothers give us clues of what we find attractive in the women we date and eventually marry. Therefore a man’s understanding of women is usually an interpretation of what his mother demonstrated. Mothers who were warm and loving, bring up men attracted to women with similar characteristics. Where mothers were independent and purposed, men seek partners who mirror these traits.

But where mothers were manipulative, confrontational and used guilt to bind their sons, a boy grows believing that it is his job to rescue women from tribulations of her own making. He only ever knows how to respond to a woman in distress and his personal needs are always secondary in the relationship. A mother who has a depressive personality, who switches from hot to cold on a whim can turn a man into a commitment-phobe, always afraid to get too close to his partner, as a result of the fear of past emotional hurt experienced at home.

In navigating manhood, masculinity is what we inherit from our fathers or in their absence, positive male figures in our lives. The role of the father figure is to help the boy confront his mother by cutting the metaphorical umbilical cord and become his own man.

It is only when men learn to see their mothers for who they are, as human beings and not as mother the goddess, with their challenges and flaws, strengths and weakness that they come to truly appreciate a mother love and reciprocate on their own terms as men. When a boy stops craving his mother’s attention and earns her respect, he becomes a man. Until that happens, he will jump every time mama calls and irritate the hell out of the woman trying to find solace as his queen.

May 25, 2015 in Relationships
The Making Of Fatherless Nation

May 25, 2015 in Relationships
1 Rugby Tournament, 6 Beers and a Pastor named Johnny

May 25, 2015 in Relationships
Still Looking For A Gentleman?

May 25, 2015 in Relationships
Most Girls Don’t Realize That Farmers Are Closet Romantics